A lot has happened since my article on Rowville Rail appeared in The Age in late May, which followed the announcement by the Andrews State Government to build a Tram line to Monash University.

• Monash Council, Knox Council and the Eastern Transport Coalition have all passed motions in support of a Tram solution, but with a preference for heavy rail
• The Fund Rowville Rail advocacy group held a well attended panel discussion, which I sat on, with over 300 attendees
• The Andrews State Government has announced plans for a massive suburban rail loop line from Cheltenham to Werribee
• The State Opposition have announced land reservations along the route from Huntingdale to Rowville.
• The Federal Government has announced funding, beyond the foreword estimates, of $475 million for “Monash Rail”

The State Government’s announcement is a bold vision for the future of our rail network and is very similar to the proposal that I made in my article (albeit a lot bigger and inclusive of all lines instead of just those in the East, which was my main area of focus). It would link up every single metropolitan train line, whilst creating heavy rail connections at important hubs that currently have no such access such as Monash University and Doncaster. There are some who argue that we can’t afford to wait 30 years for this to be built, but what we can’t afford to do is build the suburban rail loop to the detriment of other funding in our transport network. The suburban rail loop must be built alongside other critical transport infrastructure such as Rowville, Doncaster and Airport Rail and also Melbourne Metro 2. As a passionate transport advocate, it’s pleasing to see such bold, visionary, long-term planning for the future of our transport system.

The announcement from the State Opposition of land reservations, or overlay protections along the proposed Rowville route, is perhaps the most troubling; it effectively means that they’re not planning to build it anytime soon. We’ve had land reservations for Doncaster Rail and for Airport Rail for decades – we’re still waiting.

The Federal funding is notably for “Monash Rail” and is not set to be delivered for another 8 years. I’ve read through all of the budget documents pertaining to this commitment and not once does “Rowville” get mentioned. Politicians are playing politics with this issue yet again. There is absolutely no reason we shouldn’t be starting to build this line tomorrow – and here’s how we can.

The Dandenong Rail corridor is the busiest on the metropolitan network. The current signalling system allows for trains every three minutes resulting in a theoretical maximum of 20 trains per hour. It is common practice for a practical operating capacity of around 80% to cater for short delays, which brings the maximum down to 16 trains an hour. The current utilisation in peak hour sits at 15 metropolitan trains and 2 V/Line trains, meaning that the corridor is oversubscribed by one train per hour. High capacity signally, which will begin operation next year, increases the capacity to one train every 144 seconds, or 25 theoretical trains per hour (20 at practical capacity). This effectively means that the new signalling will allow for an extra 3 trains per hour. The seven carriage new high capacity trains which will begin rolling out in 2019 will alleviate a lot of the current capacity issues, but Metro Trains predicts that even with the new trains and the new signalling system, it will require the extension of the trains to the full ten carriages by 2027 to meet demand.

Simply put, there is no capacity currently, or in the near future, for the 4-6 trains per hour that Rowville Rail would require. The only way to add capacity to the existing Dandenong corridor would be to add two additional tracks between Huntingdale and South Yarra, given that the existing lines between South Yarra and the City Loop being utilised by the Dandenong Line will be freed up by the introduction of Melbourne Metro. I often hear suggestions about running a third track only, but this isn’t possible as trains have nowhere to go once they reach the city; they need a return track.

Since my article I have had a lot of feedback and suggestions, and these have caused me to analyse my proposal and make a few small tweaks. Currently, there is only a single track between Upper Ferntree Gully and Belgrave due to topography restrictions. Replacing that section of the line with a shuttle service will allow the existing capacity on the line to be utilised via a heavy rail extension to Rowville. Once the shuttle is in place, instead of terminating at Upper Ferntree Gully, the line could be extended to Lysterville, Rowville, Mulgrave, Monash Uni with an interchange at Huntingdale, on to Chadstone, with an interchange at East Malvern before linking up to Alamein through to Camberwell and then back in to the city. This would effectively transform the existing Belgrave line in to a massive big outer city loop. 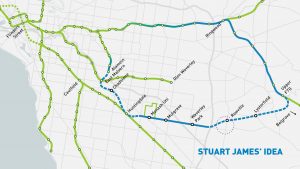 It’s an expensive option, but it allows the digging to start tomorrow whilst delivering a heavy rail connection to hundreds of thousands of people, including a rail connection to the Clayton campus of Monash University. With a turn up and go service at Huntingdale, a trip from the Clayton campus to the Caulfield campus would take around 10 minutes of travel time on a train with a 2-3 minute changeover time at Huntingdale. It would link up passengers from the Cranbourne, Pakenham, Rowville, Belgrave, Lilydale and Glen Waverley lines and provide those same passengers with a heavy rail connection to Monash University and Chadstone.

We need to invest in new and innovative ways, such as this, to encourage as many people as possible to leave their cars at home. The only excuse left is cost, but if we’re planning properly and building a transport network to last us hundreds of years, this is the way to go. Build it.